RALPH LUNDSTEN
from EMS to Andromeda
the early works of Ralphus Rex
by Alan Freeman. 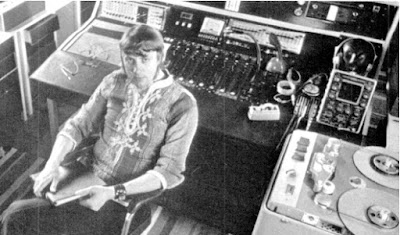 Ralph Lundsten is one of those enigmatic characters in new-music, in that he's pushed-on with his unique avenue in music regardless of style, fashion, or even a logical progression in his own career. He's an explorer, an eccentric, an individual unique talent. The thing is, though, that when someone follows their own vision, that vision will change throughout their life based, not only on the advancements in technology, but also on their state of mind, emotional and social development. Thus, as with the music of Tangerine Dream, what Edgar Froese & Co. played in their early days is nothing like what they do now. This is also the case with Ralph, and (similarly) what we're interested in at Audion is the early works of Ralph Lundsten, the avant-gardist...
Ralph Lundsten was born 1936 in Ersnäs, Sweden. At a young age he started exploring the avant-garde, and was obviously fascinated with the new technology installed at the Stockholm Electronic Music Studios (aka EMS). He started electronic sound exploration in 1959, and found an aid in Leo Nilsson, with whom he collaborated for a number of years. These formative experiments involved use of oscillators, early studio-based synthesizers, along with extensive use of tape-collage and echo/delay techniques. Also, (quoting original LP cover notes) Ralph "became famous as a visually creative artist through his prize-winning motion pictures, his noted exhibitions at home and abroad, and his exciting experiments with electronic pictures and sound sculptures" - yes, Ralph proved to be a man of many talents!
It didn't take long for Ralph to discover unique techniques instantly recognisable as his, these involved clusters and patterns of notes/tones, seemingly sequenced or looped, all in a very odd, quirky style. Based on early studio photos all this was done with tape trickery using a hybrid of musique-concrete and Terry Riley type "feed-back" or "Frippertronic" techniques. Nowadays a similar effect can be achieved using a digital pitch-shift delay in tandem with other echo and delay devices, but to create the complexities of what Ralph Lundsten did in the 1960's is still not easy. And, to do it with his unique panache is nigh-on impossible! Back then digital effects didn't exist, and even solid-state echo devices were rare. So, the mind boggles as to how he did it. A clue is probably given on an LP cover, where he is holding two Stylophone type pens over (and connected to) some sort of metal transducing plate. I can imagine that many of the early works took weeks and weeks of intensive studio work, experimenting with and modelling waveforms, cutting and splicing tape, setting-up tape decks with extra record and play-back heads, passing the sounds back and forth through all sorts of filters reverb, and obscure processing devices, etc., etc. Actually, it seems he was spending too much time in the EMS (Stockholm was a prolific centre for new avant-garde talent), so Ralph set up the first independent electronic music studio in Sweden. He built his Andromeda Studio at his home (a fanciful painted wooden house) in Saltsjö-Boo near the coast, east of Stockholm. There he could spend as much time as he liked experimenting and recording, developing the unique Lundsten sound. 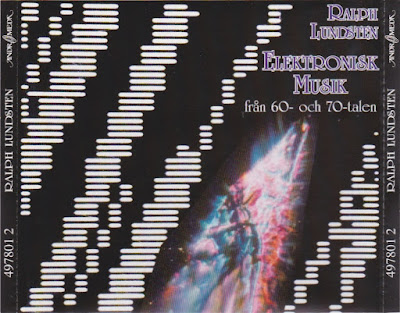